During the Winter of 2020 I took a course about Comics and Graphic Novels with the amazing Willow Dawson at University of Toronto School of Continuing Studies. The project for this course was to produce a story and characters for a comic, passing through all the stages of making a graphic novel, since the conception, to the script, thumbnails, sketching, inking, lettering and publishing. The final assignment was to create two pages of a comic with the characters and story that were developed during the course. My comic is called Moonchild.

Moonchild is a fantasy story about a young witch called Miki who decides to run away from her magical land to live in the Common World alongside humans. There she meets and befriends Ben, a human boy that pushed away everything magical from his life. Together they will embark in many adventures while trying to investigate what's making magical creatures attack humans and how to stop that.
The first character that was developed by me was Ben, the human boy. As a first assignment for the course I created a comic showing how is Ben's regular day, being a human boy in a world full of magic and magical creatures.

Then there was Miki, the main protagonist of the narrative, the young witch that came from the real Magic World, wishing to leave her old life behind and become a human girl.

While giving life to the story and the characters I took a lot of inspiration from medias that I love, such as Sailor Moon, Steven Universe and Bee and Puppy Cat for the visuals. Avatar the Last Airbender, Star vs the Forces of Evil and Harry Potter were great influences for the conception of the story.
Just like the titles that were named before the story for this comic is supposed to start light and playful, dealing with themes of friendship, family and teamwork but as the narrative progresses and the characters get older the narrative will also get more mature, approaching themes of politics, prejudice and dealing with trauma.
Various tests of color paletes for the characters. The goal was to make their colors complement each other. 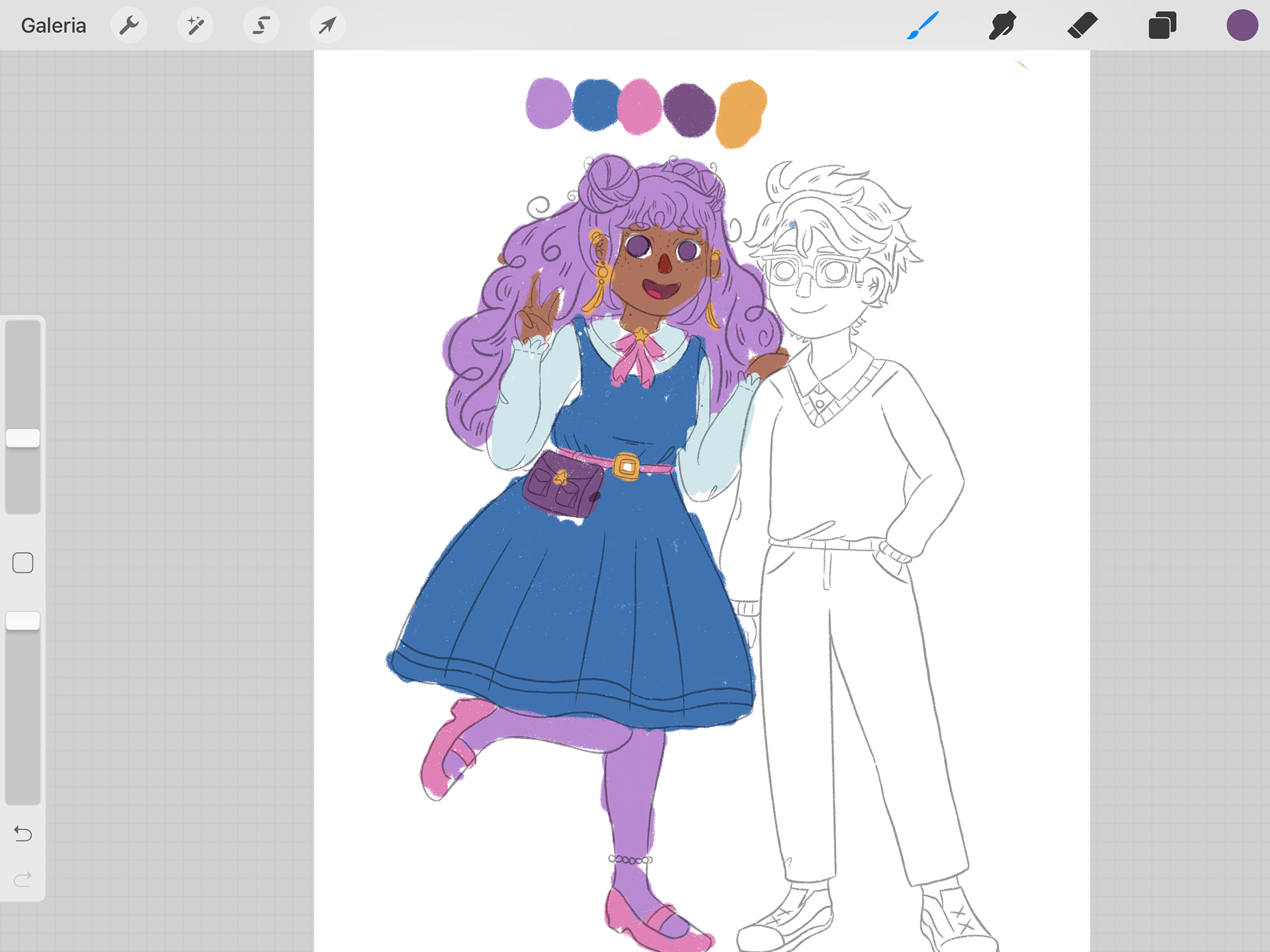 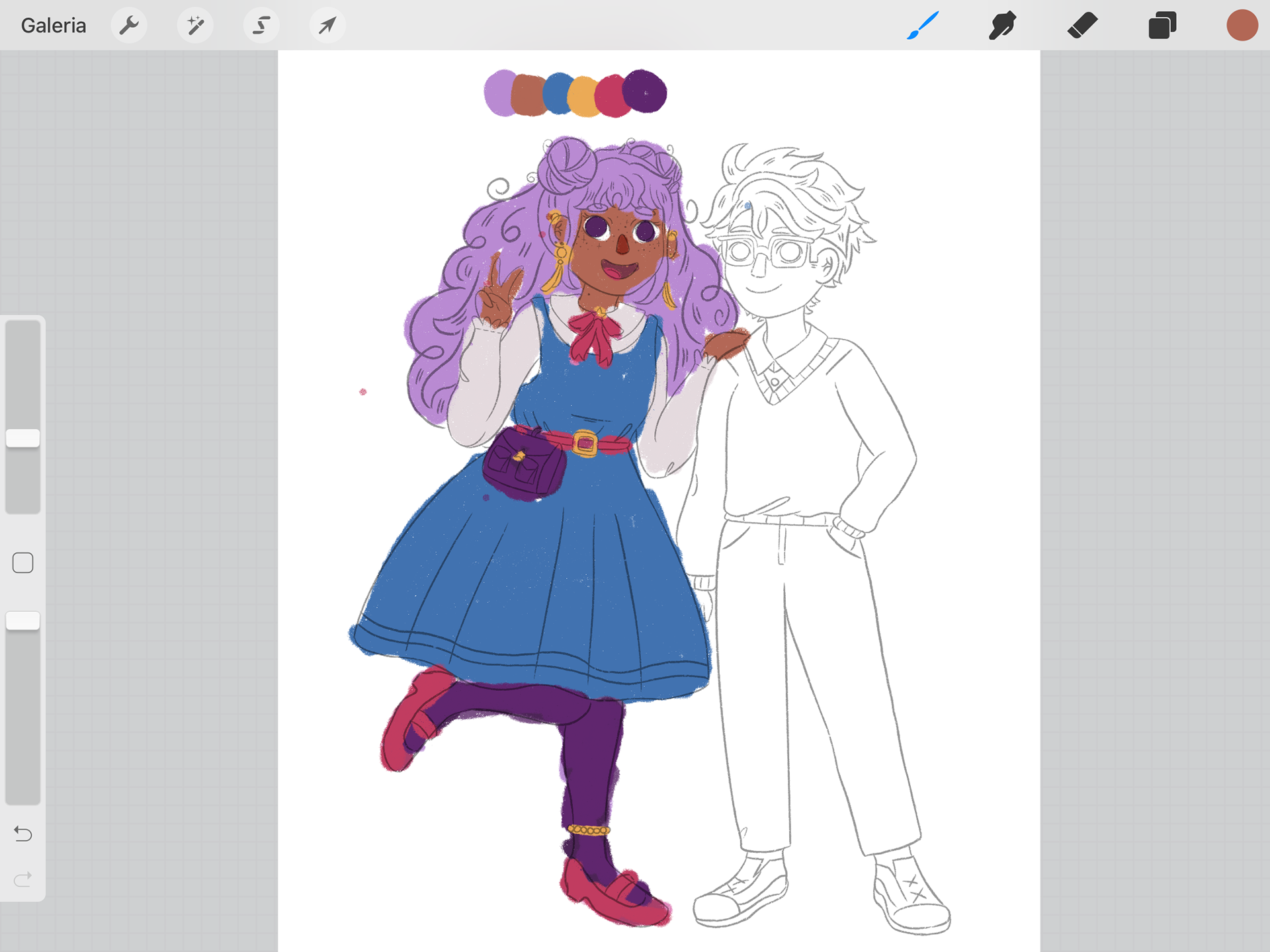 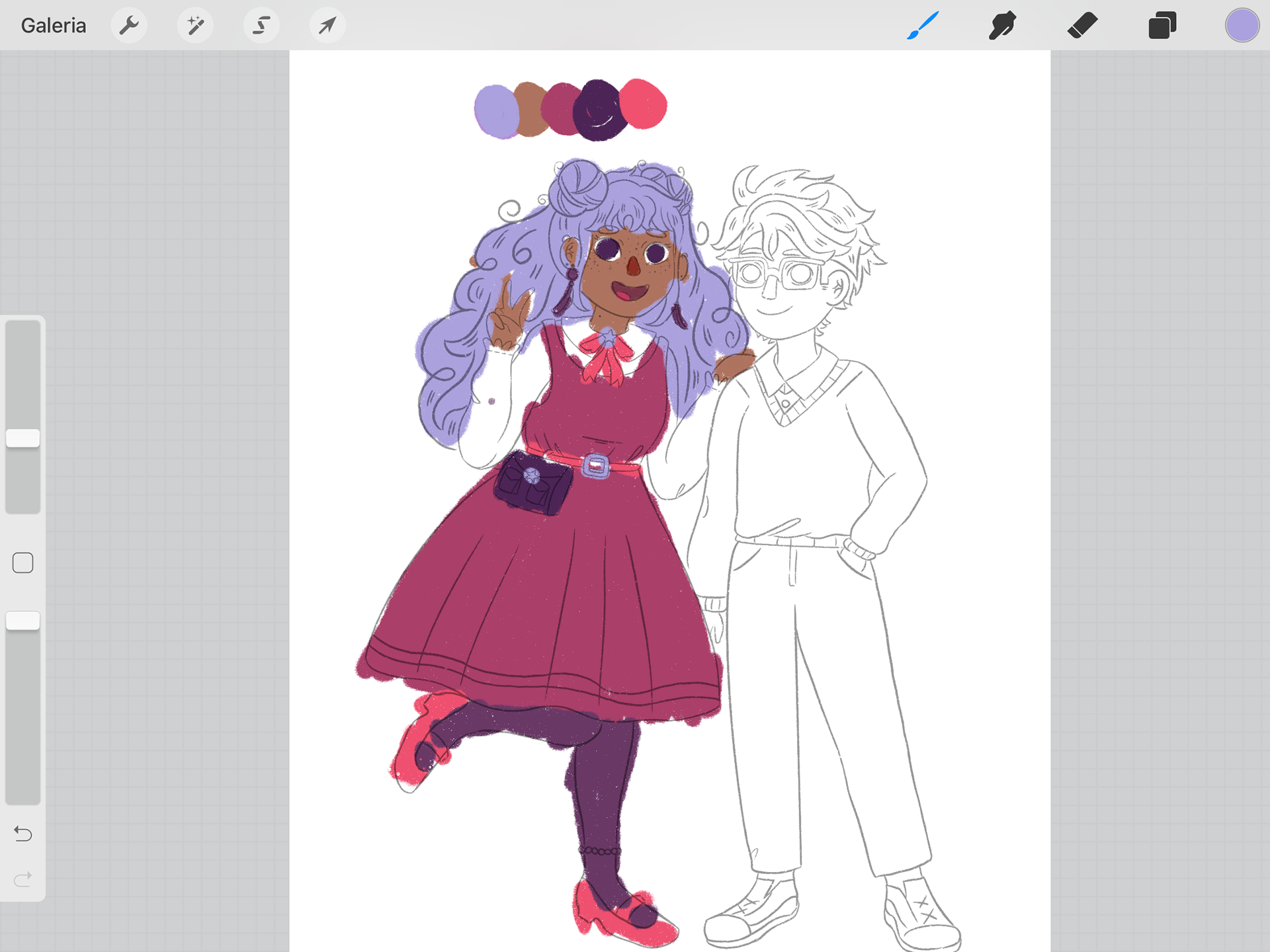 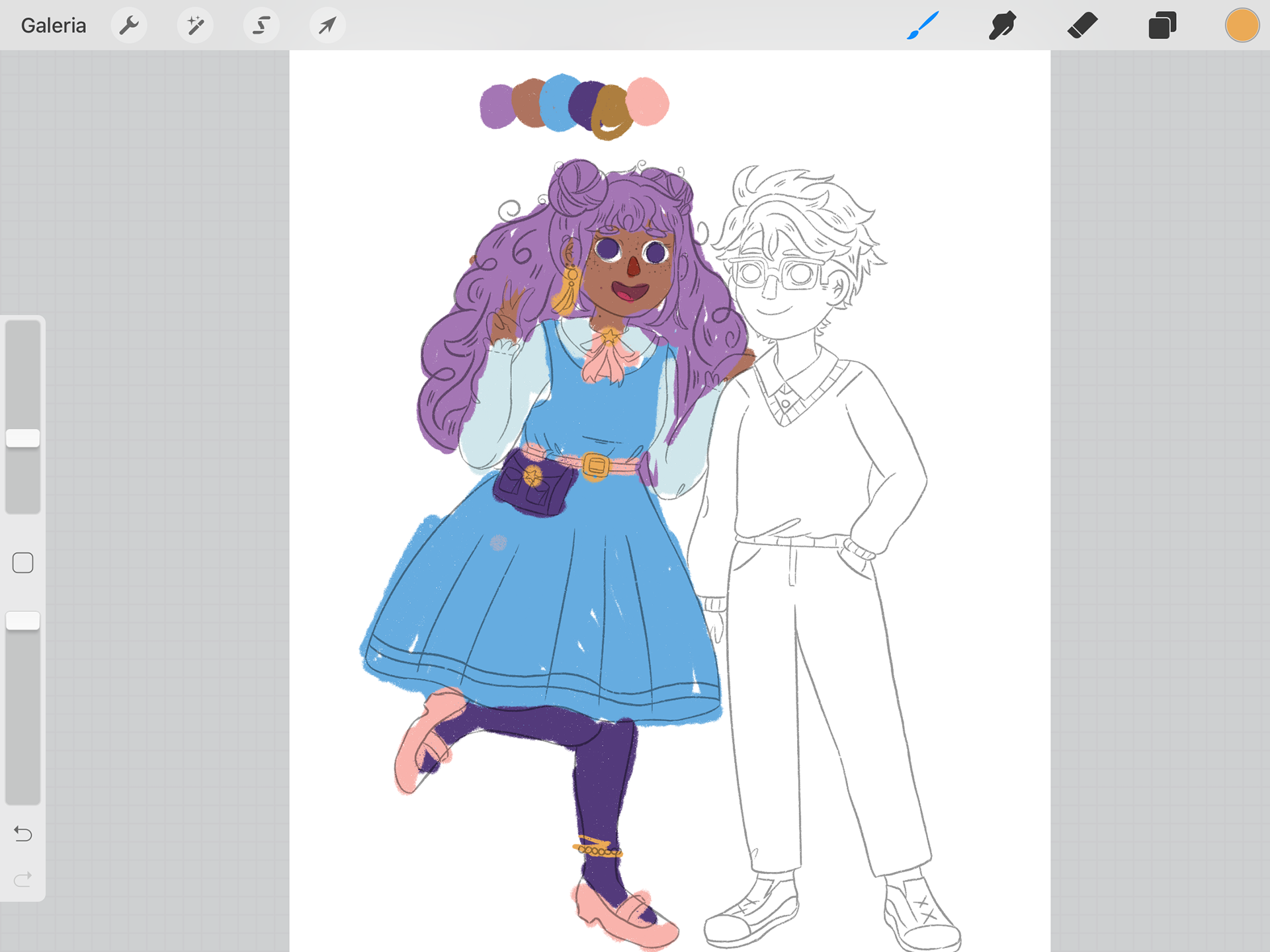 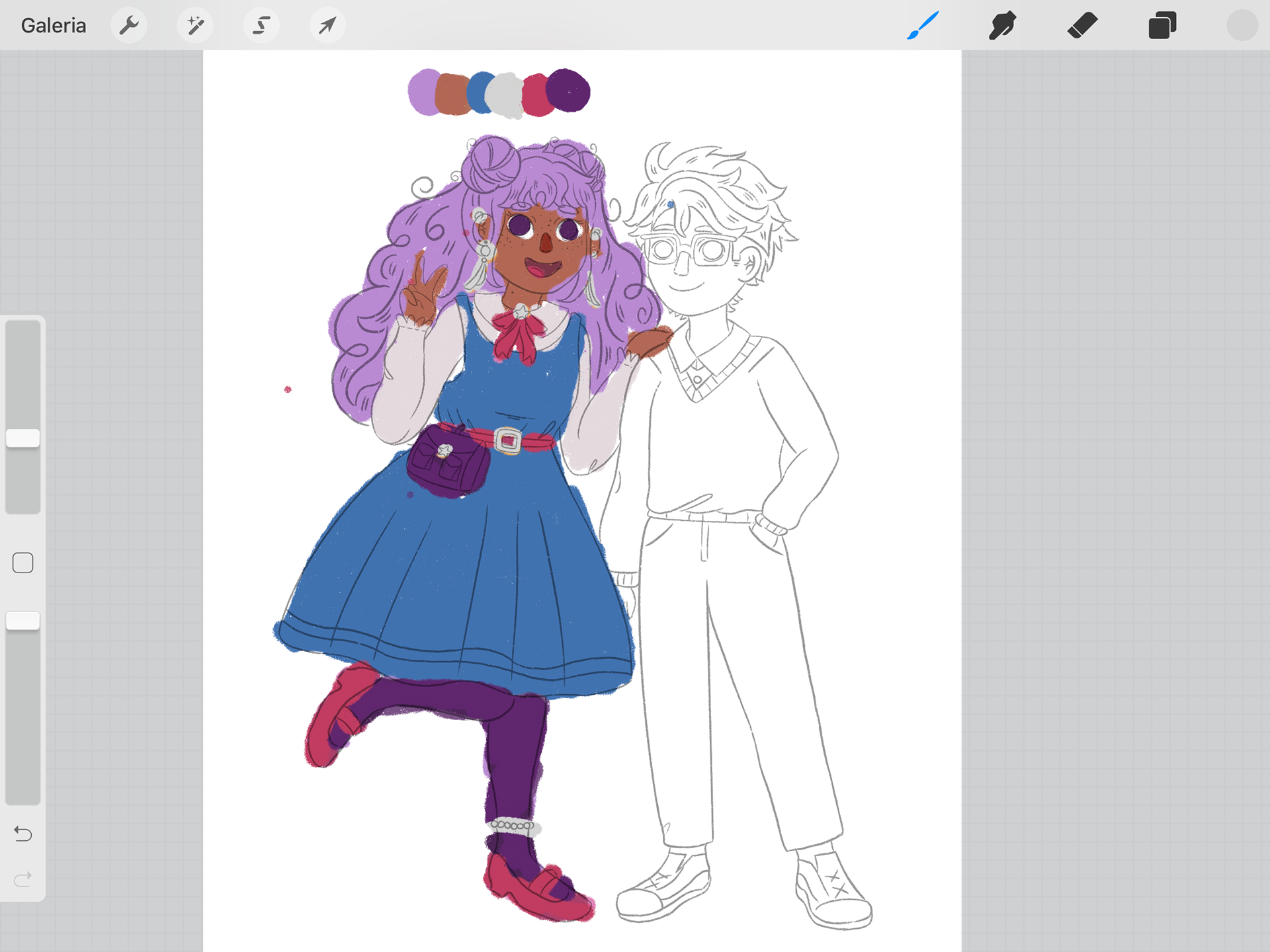 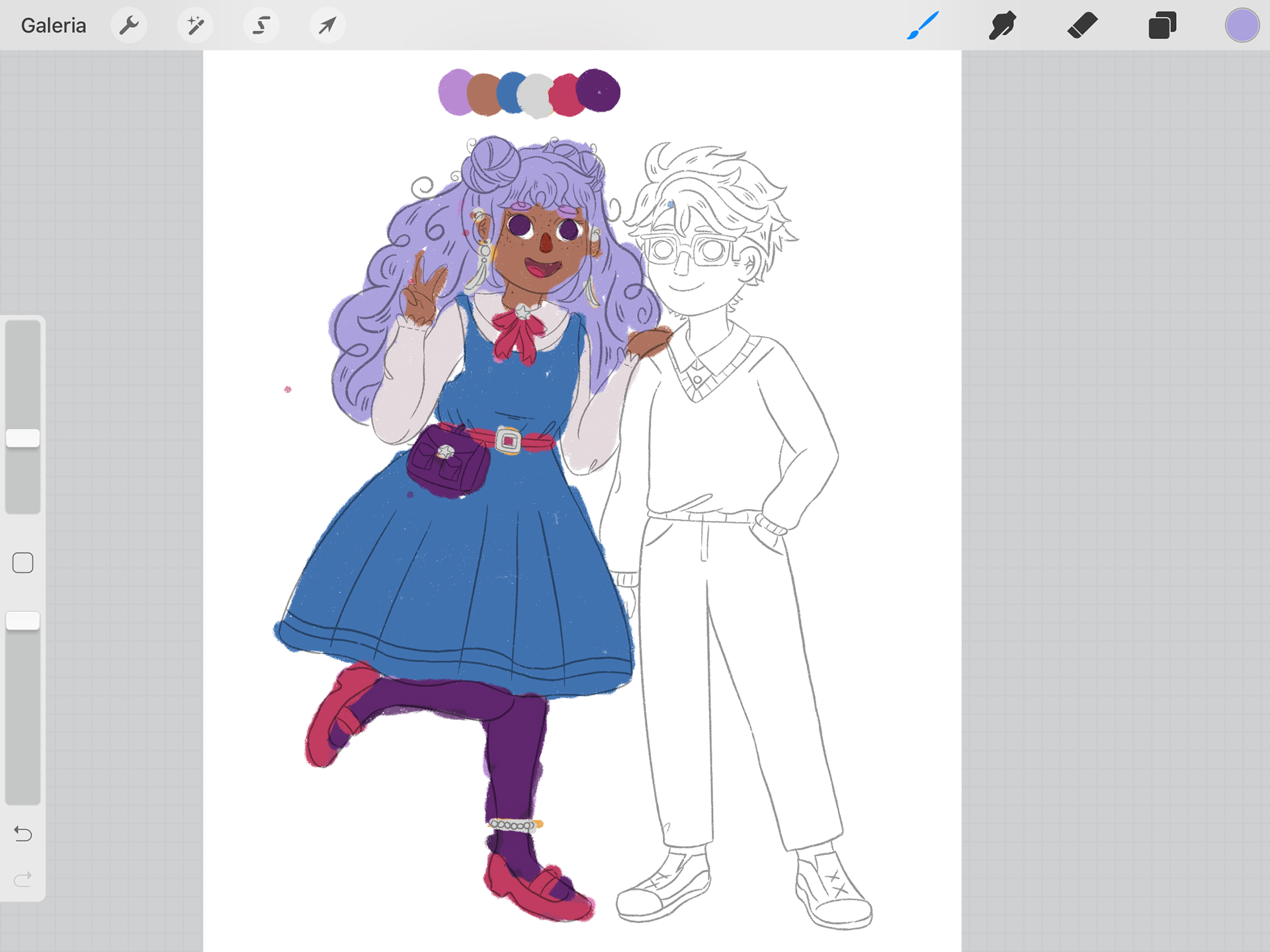 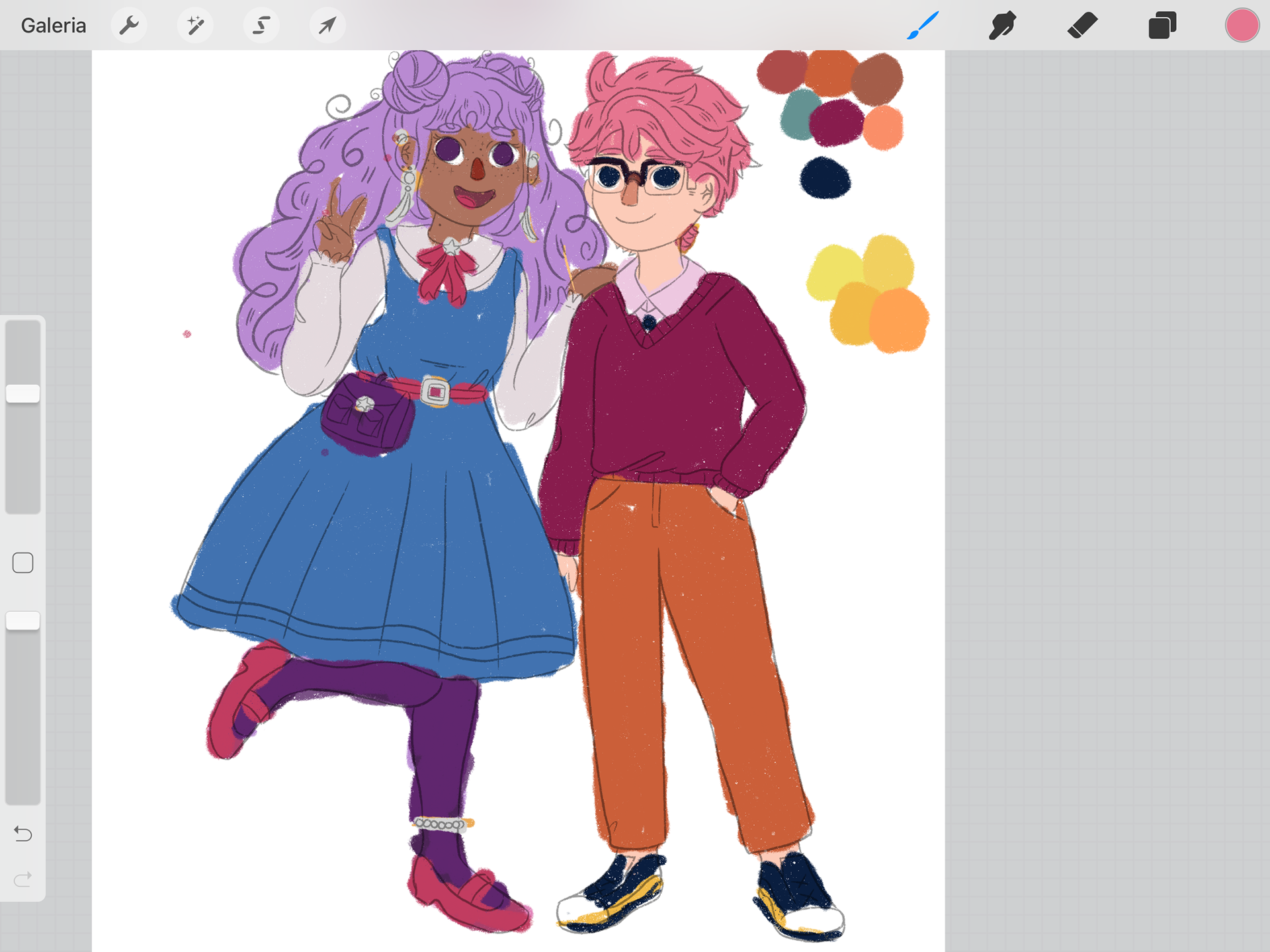 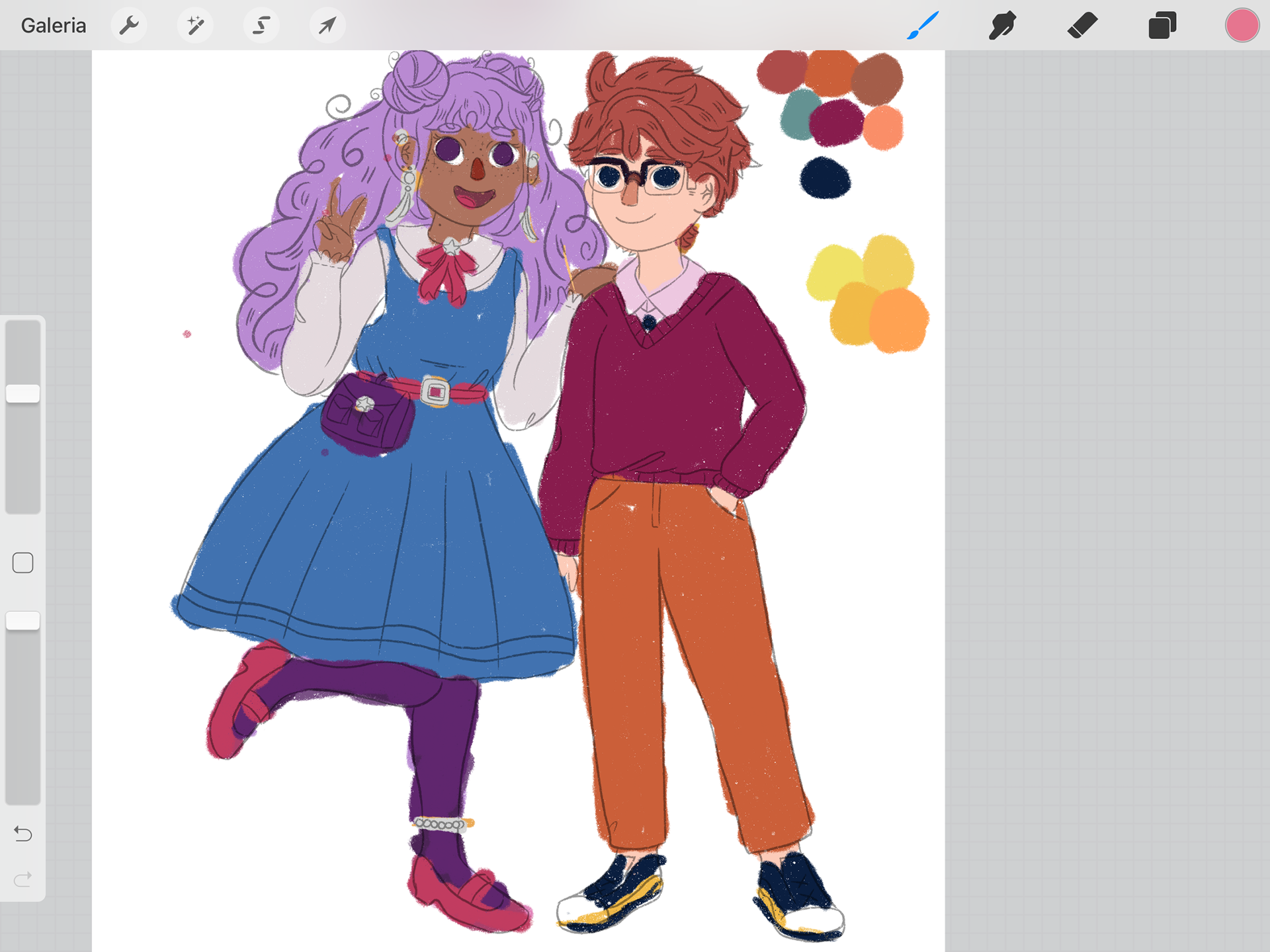 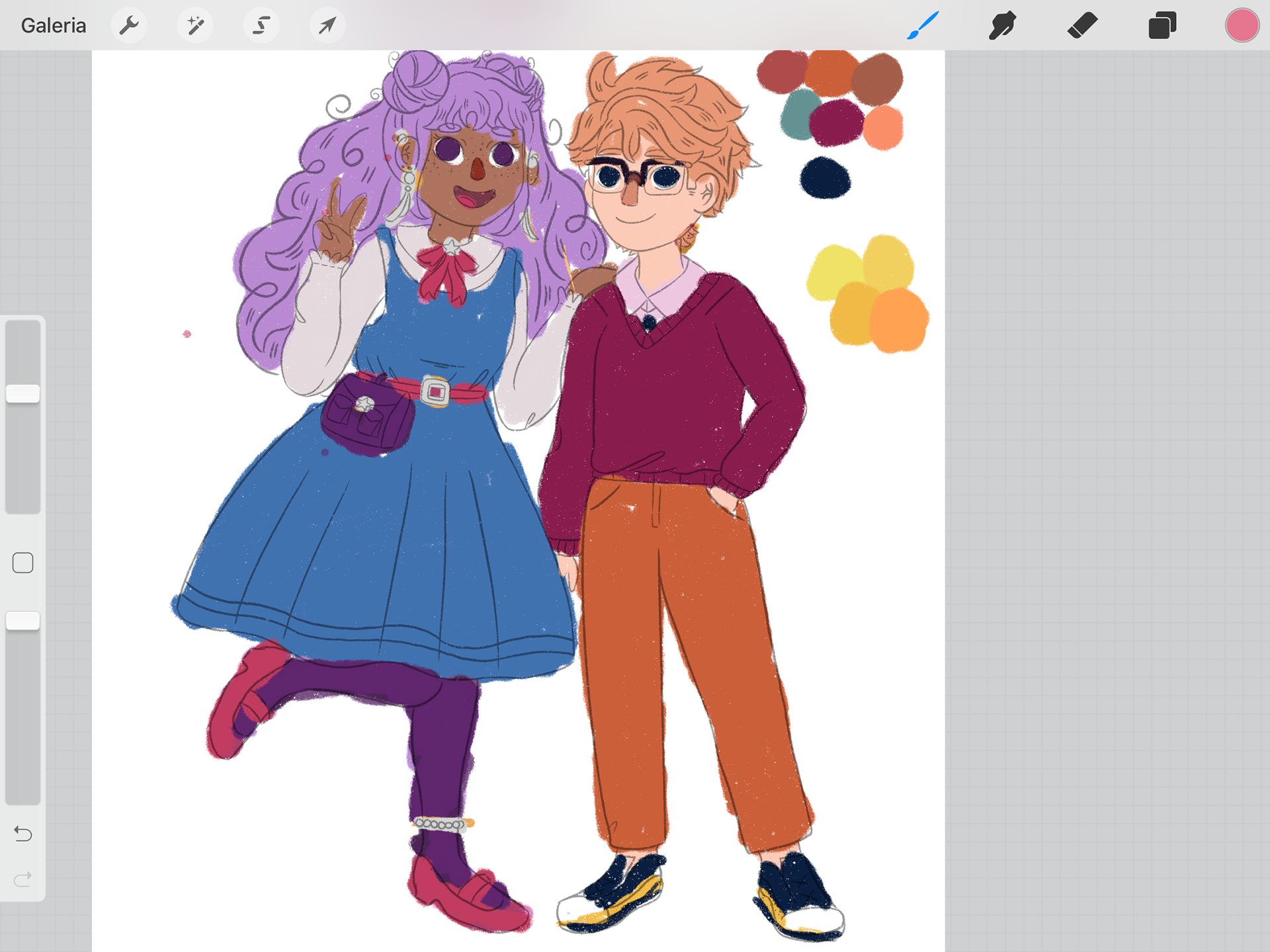 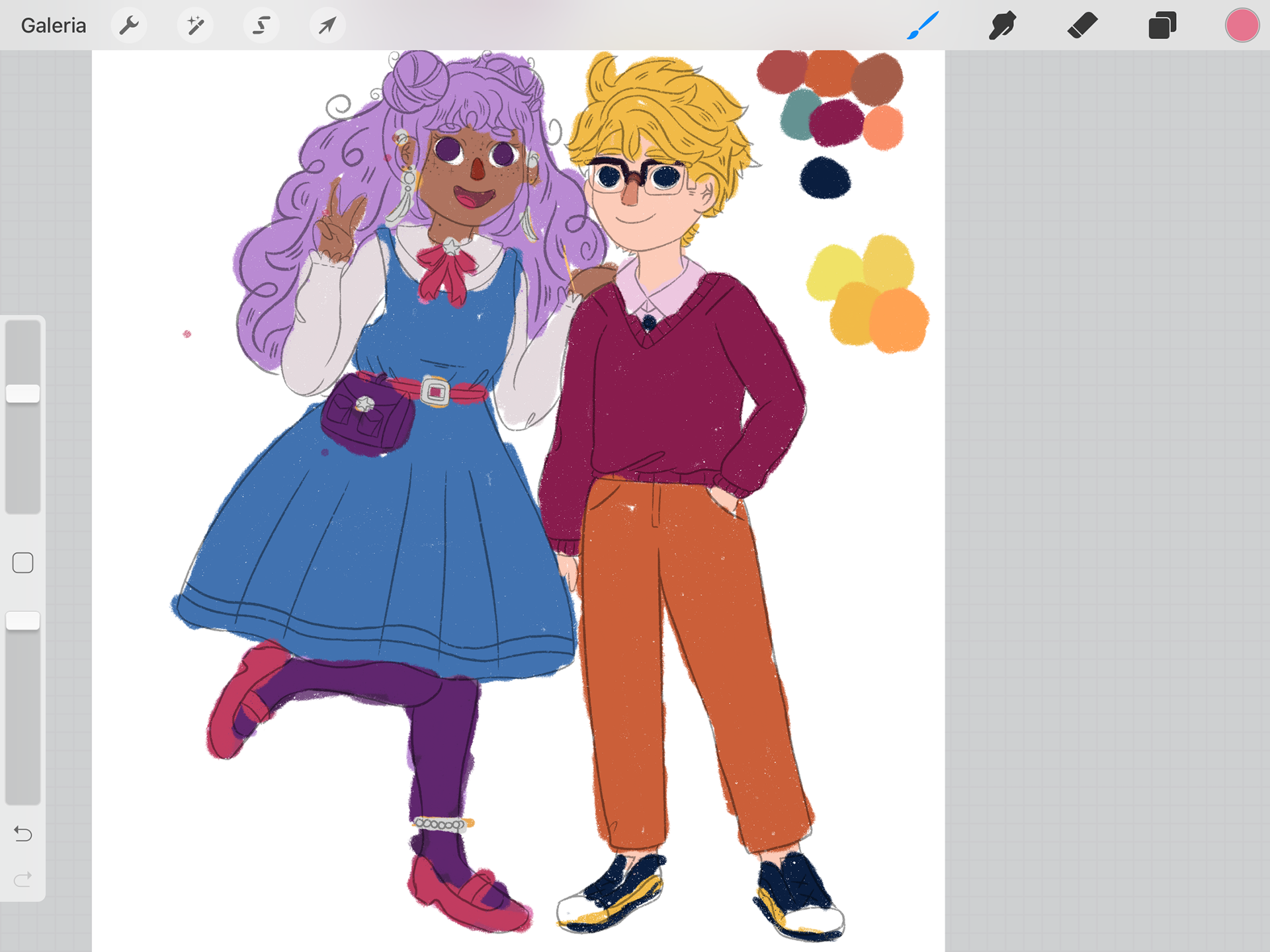 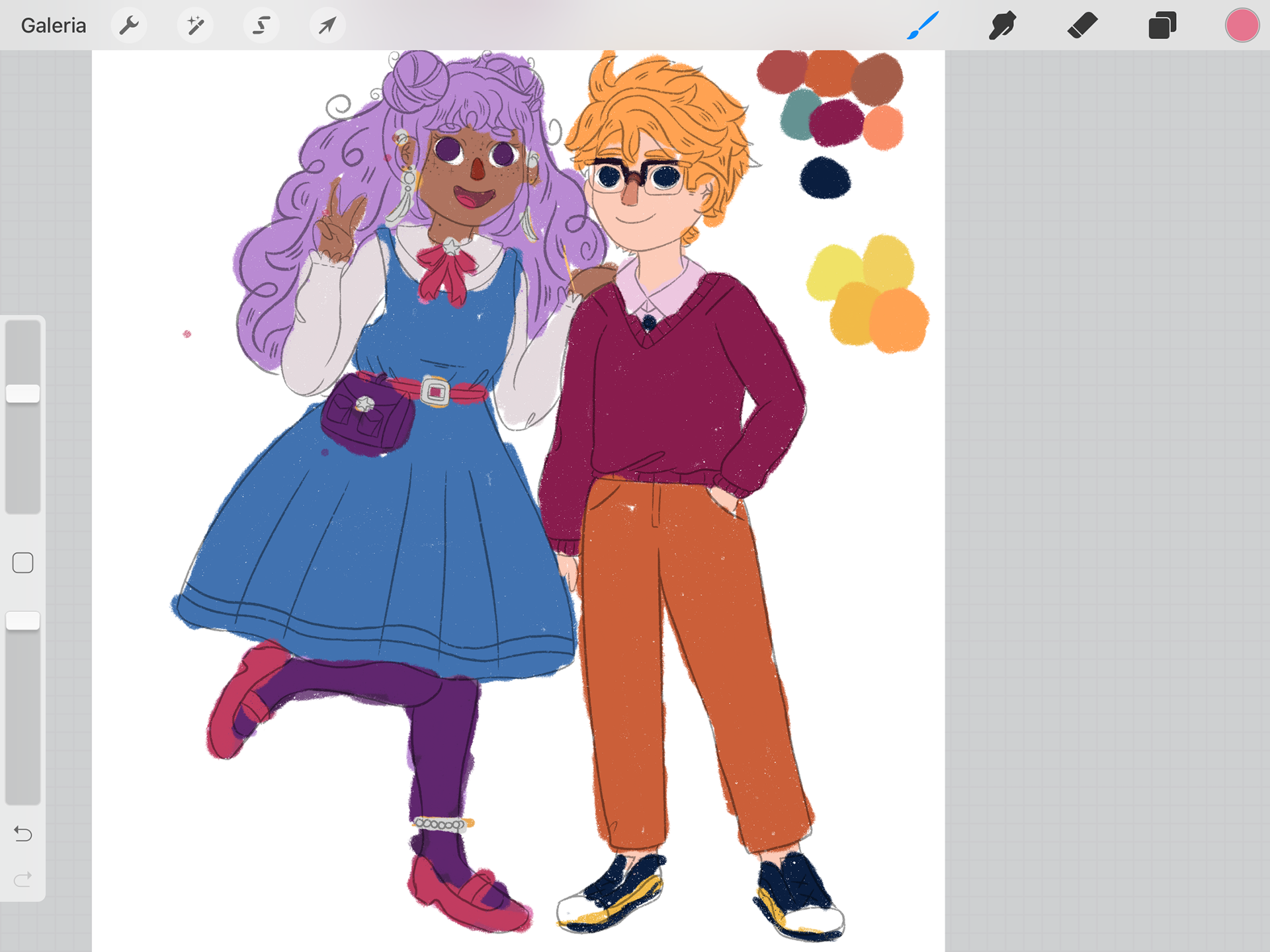 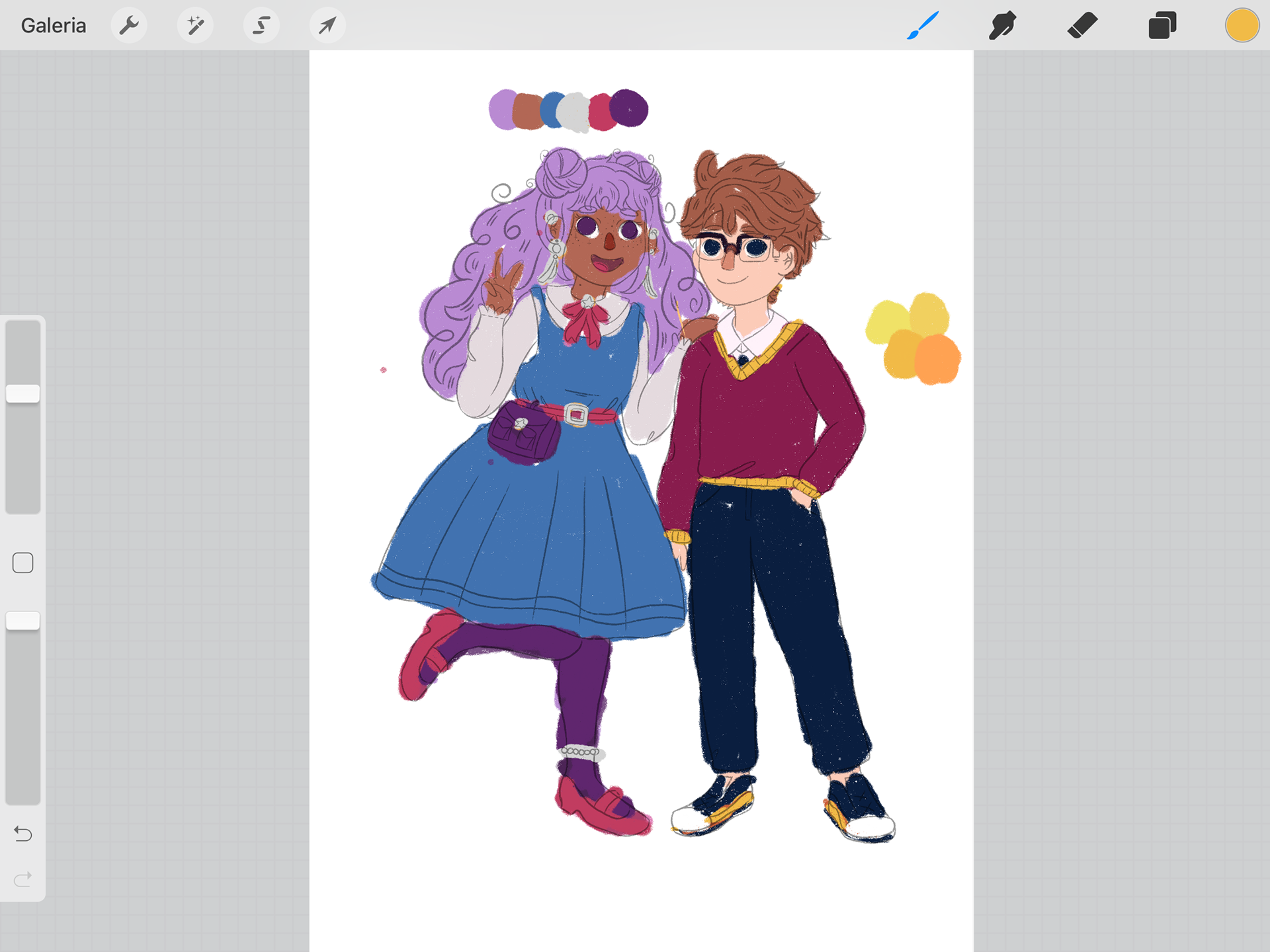 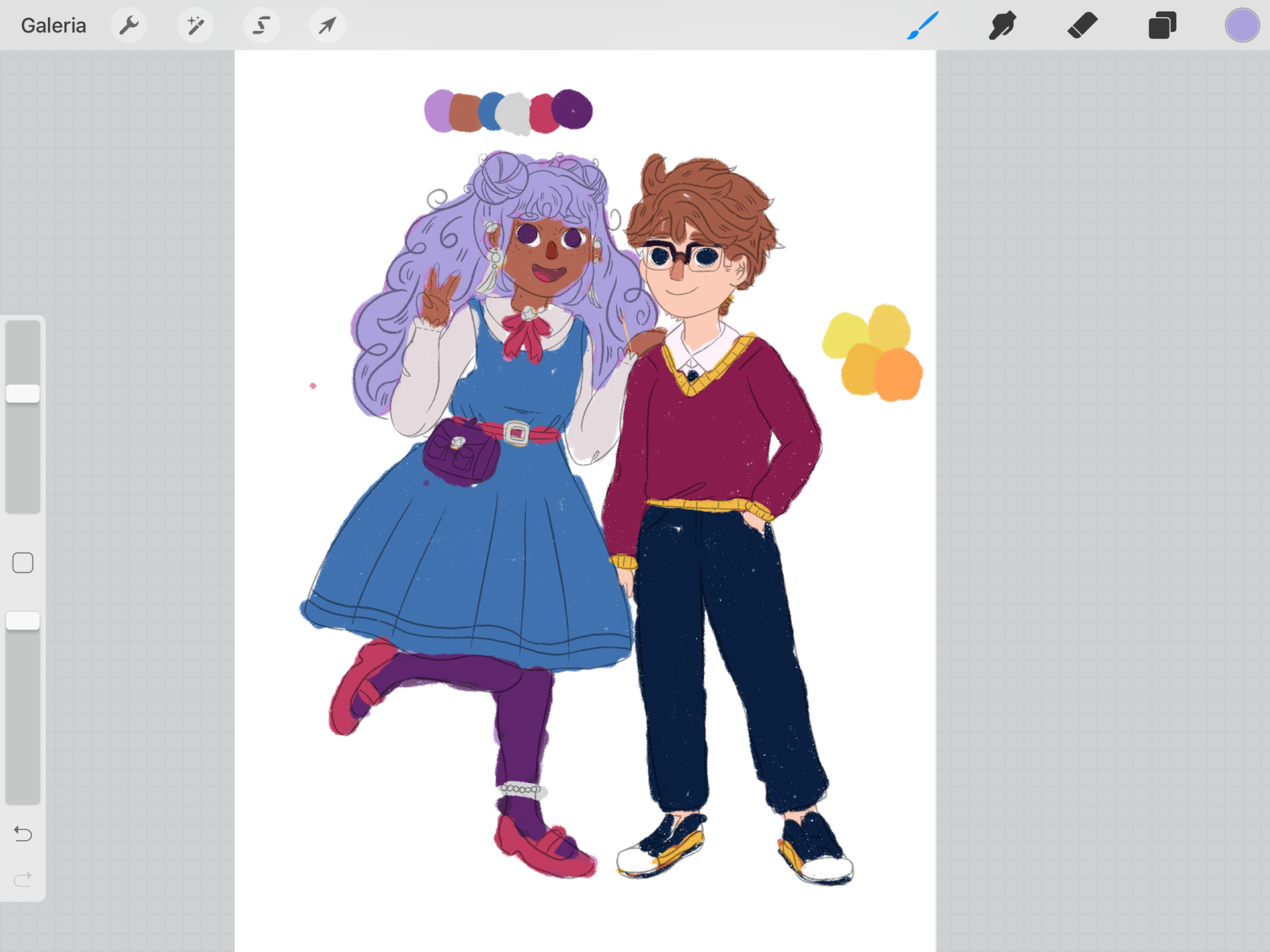 Final Result of the characters together

The Final Assignment for the course was to create two pages of a comic with the characters and story developed during the classes.
It's a regular day of Ben’s busy life. He is completing his multiple tasks at Destiny Cafe, one of his many part-time jobs. Obsessed with getting things done, he decides to do a task he was postponing for a long time. To clean up and organize the basement, who used to serve as an old stock and now it is just a place to throw things off. Filthy and very dusty, the only place at the cafe that was left for him to clean. After a great struggle, he accomplishes what he once thought it was impossible.
This scene takes place soon after Miki arrives at the Common World in a very clumsy way. She destroys all the organization and cleaning that Ben spend all day doing at the basement. This is their first encounter.

"Moonchild" is set in the fictional charming town of Spellshire, in the Common World, where regular humans live alongside magical beings of all kinds, from sorcerers and fairies, to even unicorns and dragons humanoids. All these creatures came from the Magic Realm, a magical dimension that overlaps with the Common World. Many years ago, due to serious conflicts at the Magic Realm, the portals that linked these two dimensions were shut down and destroyed. Ending all communication between worlds and separating families and friends. The story starts when Miki, a young witch, finds a hidden portal that still works and decides to escape from the magical dimension, in order to live alongside humans as one of them. The portal explodes soon after she passes through it, making it a one way trip. She ends up at Destiny Cafe, a mystic place that offers pastries, coffee and tarot reading. She meets Ben, the only human boy that works there. The two of them do not get along very well in the beginning, Miki is a energetic and lively girl while Ben is more serious and reserved. Eventually they become friends and form a very strong bond. They unite to investigate the strange events that are happening in the town. Magical creatures are suddenly losing control and attacking humans for no apparent reason, at the same time, a group called the "Peacemakers" start a movement against magic and everything related to it, demanding that magical beings must return to their origin place, even though that's impossible.
My plan is to develop this story as a full Graphic Novel soon.